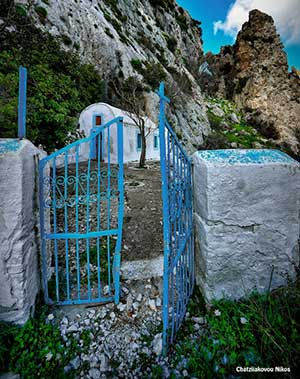 On the south coast of the island is the ‘Cave of Pythagoras’, a cave high up on the slopes of Mount Kerkis where the famous philosopher and mathematician Pythagoras of Samos was believed to have spent much of his life in around 400 BC. This cave is now open to the public.

Pythagoras, considered son of Samos, was born in the 50th Olympiad (580-574 BC). His mother was believed to have been a descendent of the first king of Samos.  Although very little is known about the life and teachings of Pythagoras, he is most famous nowadays for having come up with Pythagoras’ theorem, a theory fundamental to our understanding of mathematics that solves the problem of the hypotenuse of a right-angled triangle and bears his name. He was also the founder of a religious movement known as Pythagoreanism, a school of philosophical and poetical thought, ascribing a certain musical energy to everything to be found in the world and supporting the view that the universe is ultimately designed. The cave was thought to have been a teaching place and Pythagoras was supposed to be prepared to teach anyone who came there to him.

There are several different stories as to why Pythagoras was hiding in the cave although we cannot be sure which is true. One version suggests that Pythagoras was hiding in exile from the tyrant ruler of the time, Polycrates, because he’d accused him of trying to corrupt the young people of Samos with his teachings. Another story suggests that Pythagoras himself was politically uneasy about the rule of Polycrates and was hiding for fear of what he might do, were he ever to run into Polycrates himself, a third that the philosopher Anxaximander of Miletos did not approve of Pythagoras’s philosophical and mathematical theories and accused Pythagoria of being  a trouble-maker and infidel  and with others, forced him take refuge in the cave. Some however, believe that Pythagoras was not on the run at all but used the cave when he wanted to meditate.

There are in fact two caves, the flatter of the two Pythagoras’s ‘living cave’ and the other he used as a classroom for his teaching (the steeper of the two). The living cave has three rooms but  only two can be visited.

The caves are not easy to acces;  there is a  300m climb from Votsalakia beach and the caves are situated near the monastery Evangelistria, underneath an iconic fig tree. Near the caves are two chapels (one dedicated to Saint John and the other to Pangia Sarantaskaliotissa – cave of Santa Maria) and a spring where Pythagoras was believed to have drank the water.  From the caves you will get spectacular views across the valley, down the dramatic mountain side and out to sea. Pythagoras’ caves remain one of the main attractions of the island of Samos.